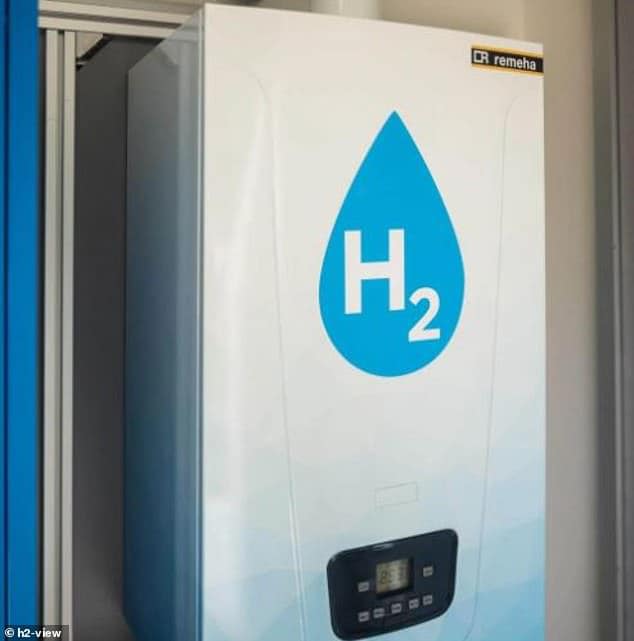 Posted at 11:03h in Uncategorised by admin_gas 0 Comments
0 Likes
They run on an extremely flammable gas that takes vast amounts of energy to create, so are the hydrogen boilers that eco-zealot ministers are pushing REALLY an alternative to your faithful gas boiler?
You may view your gas boiler as a faithful workhorse which sits in a corner, blamelessly heating your home and providing hot water year after year.
But to the Government it is an environmental vandal which has had its day.
This week, the Department for Business published its energy White Paper, suggesting ways that it hopes Britain might become net zero carbon by 2050. Like it or not, your gas boiler is in its crosshairs.
By the mid 2030s, the paper insists, all new heating systems will have to be low carbon or have the potential to be converted to a ‘clean fuel supply’ — meaning hydrogen.
But just how realistic are the Prime Minister’s plans to replace all our boilers? Is the timetable possible — or will the whole country end up paying the price for his impetuosity?
It is hard not to be cynical. We’ve heard hydrogen is the answer to all our energy problems so many times it is tempting to view the Government’s enthusiasm like the product itself: a load of hot gas. 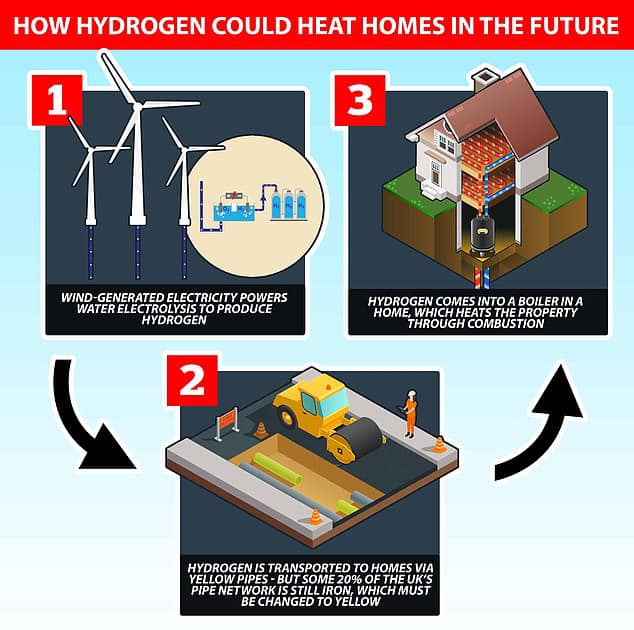 Problems
What is more, the PM approaches environmental issues with the zeal of the convert. He was once a sceptic who wrote that wind turbines ‘couldn’t pull the skin off a rice pudding’, but he is now one of the keenest advocates of green energy in government.
His administration has already announced a ban on new petrol and diesel cars from 2030, ten years ahead of the previous schedule. He has vowed to quadruple offshore windpower. And he wants to cut carbon emissions faster than any other country.
It is also easy to see the hand of Boris Johnson’s fiancée, Carrie Symonds, in his Damascene conversion.
She has campaigned on green issues and is friends with fellow eco-campaigners, environment minister Zac Goldsmith and his brother Ben, who sits on the board of Defra.
Boris’s father Stanley, too, may be a big influence — last year he spoke at an Extinction Rebellion rally. There is no doubt that eventual conversion to hydrogen could make sense. For a start, the oil and gas industry is proving an enthusiastic investor.
The drive towards green energy threatens fossil-fuel producers, but at least with hydrogen (as opposed to solar and wind power) they have a head start.
They already produce large quantities of the gas, which is used in the oil-refining process.
Gas companies hope the existing distribution network could be used to supply hydrogen to homes — allowing them still to make profits in a green future.
Hydrogen may also turn out to be the cheapest and least disruptive way to turn our homes carbon-neutral, requiring us simply to replace our gas boiler with a hydrogen version when the former comes to the end of its working life.
According to Worcester Bosch, which has built prototype hydrogen boilers, there is no reason why, when they are mass-produced, they should cost any more than gas boilers, which cost from around £600.
Indeed, boilers are being developed which can run on either natural gas or hydrogen, so we wouldn’t all have to replace our boilers at once.
The low-carbon alternative to hydrogen is to replace gas boilers with electric heat pumps. But these are much more expensive, with air-source pumps costing up to £8,000. That isn’t all.
Heat pumps work with lower water temperatures than gas boilers, so it could mean having to install much larger radiators or underfloor heating.
So, there are a number of reasons for taking hydrogen seriously. The trouble is that there are huge problems to overcome before it can be piped into our homes and there is no guarantee they can be solved by the date the Government wants to set for banning gas boilers.
This would be in just five years for new-build homes — even though, as yet, no UK home has a hydrogen boiler.
The biggest issue is that hydrogen doesn’t occur naturally as a free-standing chemical element. It has to be made — a process which itself consumes large amounts of energy.
There is nothing ‘green’ about the hydrogen currently being produced: almost all of it is from coal or natural gas, in a process which, globally, has been estimated to produce as many carbon emissions as Britain and Indonesia combined.
For hydrogen to be part of a zero-carbon future, the plants producing it will either have to capture the carbon emissions and pump them underground or it will have to be produced by electrolysis — a process which involves passing electric currents through water. 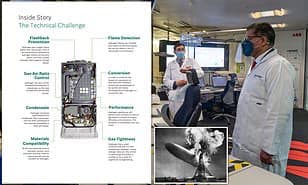 Folly
But neither of these technologies has yet been proven on a commercial scale. A £1billion project in Scotland to build a commercial carbon-capture plant collapsed five years ago.
An experimental electrolysis plant which was opened in Northern Germany in the summer seeks to produce green hydrogen on a commercial scale, but it is early days.
If we go down the electrolysis route, hydrogen can only be as carbon-free as the electricity used to produce it, which would require a massive step-up in wind farms, solar energy and hydro-power.
Meanwhile, it would be folly to assume that we can produce sufficient quantities of green hydrogen at an affordable price.
The other big problem is safety. When many people hear the word ‘hydrogen’ they think of the Hindenburg, the German airship which burst into flames on arrival in New Jersey in 1937, killing 35 people and blowing up Hitler’s claim to technological prowess.
Being made up of very small molecules, hydrogen is more likely to leak from fissures in pipes than natural gas. Moreover, it can turn pipes made from iron and steel, which still form a large part of our gas distribution network, brittle.
Then there is the problem of what happens if hydrogen leaks into our homes. Natural gas, of course, is itself an explosion risk, as we were reminded last weekend when a house in Lincolnshire was ripped apart.
But hydrogen is more dangerous. It has a very wide flammability range, so it can explode whether it is present in large or small concentrations.
These problems are not insurmountable. We could replace all remaining iron and steel gas pipes with polyethylene, which already constitutes the bulk of our gas network.
Northern Gas Networks, in association with consultancy DNV GL, has built a row of three houses on a remote airfield in Cumbria to test just how dangerous hydrogen is around the home; whether, for example, a leak could be ignited by a light switch.
There is always the option of installing hydrogen boilers outside our homes — the gas dissipates very well in the open air.
We should remember, too, that hydrogen is not exactly a stranger in our homes. Before Britain converted to natural gas over a 10-year period from the mid 1960s, our homes were heated, and before that lit, with ‘town gas’ manufactured from coal. That was around 50 per cent hydrogen.
Rash
No one, then, should write off hydrogen boilers. But as it tends to do on anything related to climate change, and as it has done on the Covid test and trace system, the Government is allowing its enthusiasm to run ahead of the technology.
History is littered with technologies which have never lived up to their promise, such as nuclear fusion, which back in the 1970s we were told would soon provide us with virtually limitless quantities of nearly free energy, but which continues to elude technologists.
Hydrogen-heated homes could turn out to be another dud. That is not to say we shouldn’t try it — hydrogen-powered cars and buses exist and trains are being tested for introduction in 2023.
But it does suggest that setting a date to phase out gas boilers before we even know whether we will have a commercially viable alternative could be very rash indeed.
The death knell for gas boilers that’s tolling before its time | Daily Mail Online

As a company we endeavour to work to the highest standards possible, maintaining good work ethics and professionalism to ensure customer satisfaction.